Woke up, ate breakfast (waffles instead of pancakes this time), shoved the bulk of my hiking gear into a duffel bag and packed what I’d need for the day into my borrowed orange daypack.

When I wandered outside to wait for the shuttle, who should I find smoking on the porch but Mr. Bear Grylls. He’d met up with Danny, gotten a ride into town, had his knee examined by a doctor, hitched to Wal-Mart, collected $50 from Western Union, and convinced a guy in the parking lot to give him a ride to the hostel. I think he was hoping to finagle some work-for-stay, but there wasn’t any room, so after his cigarette he headed down to the main road to try to get a ride to Neel Gap.

Joan, Catherine and I were joined in our slack-packing adventure by an older woman going by Nae-Nae. (Or maybe Nay-Nay? Neigh-Neigh? I don’t know, it’s what her grandson calls her, and spelling conventions cannot be applied to what comes out of the mouths of toddlers.)

The shuttle dropped us off at Woody Gap, where I was immediately confronted with this evocative sign:

“Blood,” “mountain” and “wilderness” are not words that inspire a lot of confidence.

But look how tiny that pack is! It’s so light! A baby could carry that pack! Or a little dog!

After five minutes Joan and Catherine were nothing more than specks in the distance, but Nae-Nae and I leapfrogged one another for most of the ascent. She’s the first hiker I’ve met with a slower pace, but she’d pass me whenever I took a long break.

I took a lot of long breaks.

The weather today was fantastic – clear and sunny, but with a cool breeze – and I didn’t see the point of rushing. I stopped for snacks. I stopped to read. I stopped to take photographs. I stopped whenever I saw a particularly nice flat rock begging to be sat upon.

I spent 45 minutes on top of Wildcat Mountain airing out my feet and admiring the view. 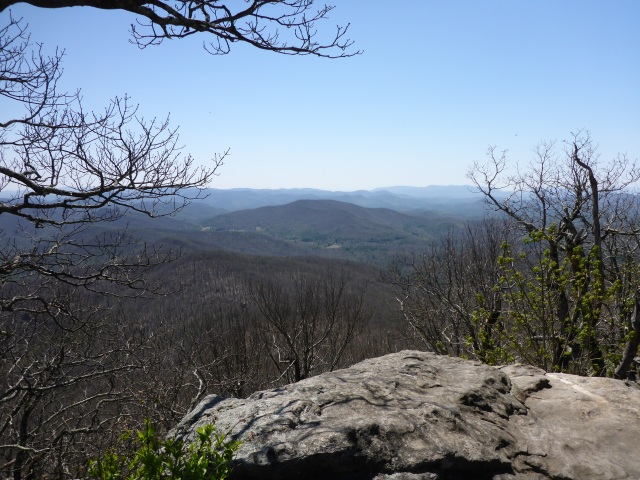 Again, it was a pretty deserted morning. I met one new thru-hiker around 10:30am, a guy fresh out of the army going by Freestyle. He did 20 miles yesterday, so I feel confident I will never ever see him again.

I also met John! John lives in the Yahoola Valley, takes history classes at the local college for fun, and volunteers to do trail maintenance on the AT. I was really excited to see a blaze being painted, so John was kind enough to pose for a few action shots. 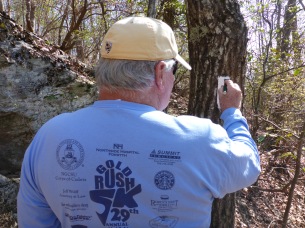 I almost asked if I could paint a blaze myself, but I thought that might be pushing it.

Trail running looks like magic to me. How do they keep their balance? Why don’t they fall? Their knees don’t even look scarred. Is that because they usually wear pads? Are they witches?

“It’s impossible to get lost on the AT,” they said. “Every junction is so clearly marked,” they said.

I dragged myself back to the main trail just as Nae-Nae was passing, and she laughed at me for a good two minutes.

By the time we reached the summit, there were a lot of people. I think I counted at least a dozen, mostly college kids and families out for a day-hike.

I took a photo of Nae-Nae with the valley in the background before starting my descent.

Going uphill is bad, but downhill is almost always worse. In this case, a lot of the trail went over bare rock.

Never have I been so happy to spot a paved road through the trees, and I did an embarrassing jog-shuffle down the last quarter mile of trail. 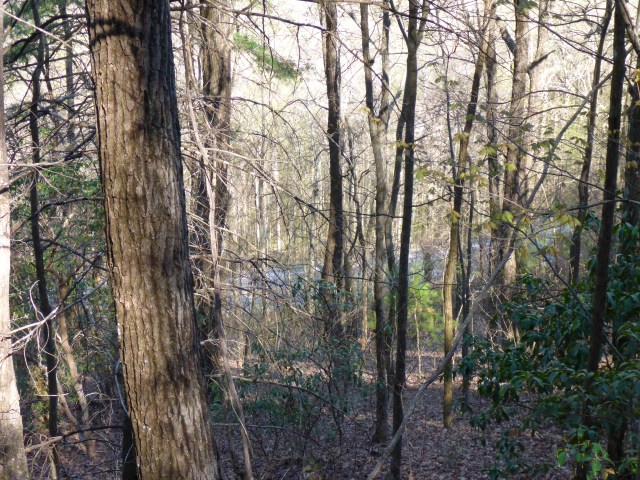 Neel Gap is home to the Mountain Crossings Outfitter, where you can replace whatever gear you’ve grown to hate since the start of your trip, resupply your food bag, ship home via UPS all the extra stuff you’ve realized you really don’t need on the trail, and, for only fifteen dollars on a first come/first served basis, spend the night in the welcoming embrace of the Historical Hiker Hostel, open every day but Christmas.

I was so engrossed in reading the Blood Mountain interpretive sign I almost didn’t notice the shoe tree overhead.

The Hiker Hostel had dropped off my regular backpack that morning, so I went into the outfitters to collect it and see if they had a bed available. I was a little concerned they might be full, but instead it was practically deserted. 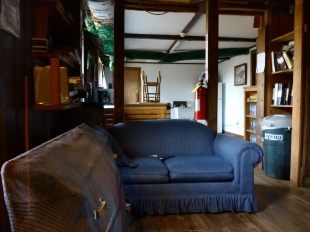 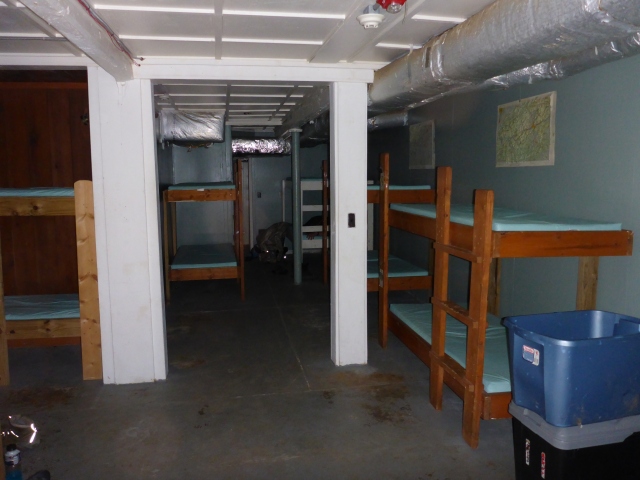 Joan, Catherine and Nae-Nae had all gone back to the Hiker Hostel for the night, so it just ended up being me and two other people in there that night. One guy I didn’t even see until the next morning because when I checked in he was already asleep in the very back corner of the bunk room and didn’t stir all night. The second guy was an uncommunicative college junior, Sam from Massachusetts, doing a seven-day section hike over his spring break. We exchanged, at most, a dozen words over the course of the evening. The hostel has a big selection of VHS tapes, and he popped in The Empire Strikes Back, watched the first twenty minutes, went outside to make a phone call, and was in his bunk by 8pm.

I spent most of my night sitting on the couch in the common area using the wifi and separating out what I wanted to ship home while shivering under my sleeping bag because it was absolutely freezing in there. To add insult to injury, right next to the couch was a large sign that said “ATTENTION! NO GEAR WITHIN 6 FT OF HEATER” hanging over an empty fireplace screen.

There was no heater.

It was all a cruel joke.